it's all about the music 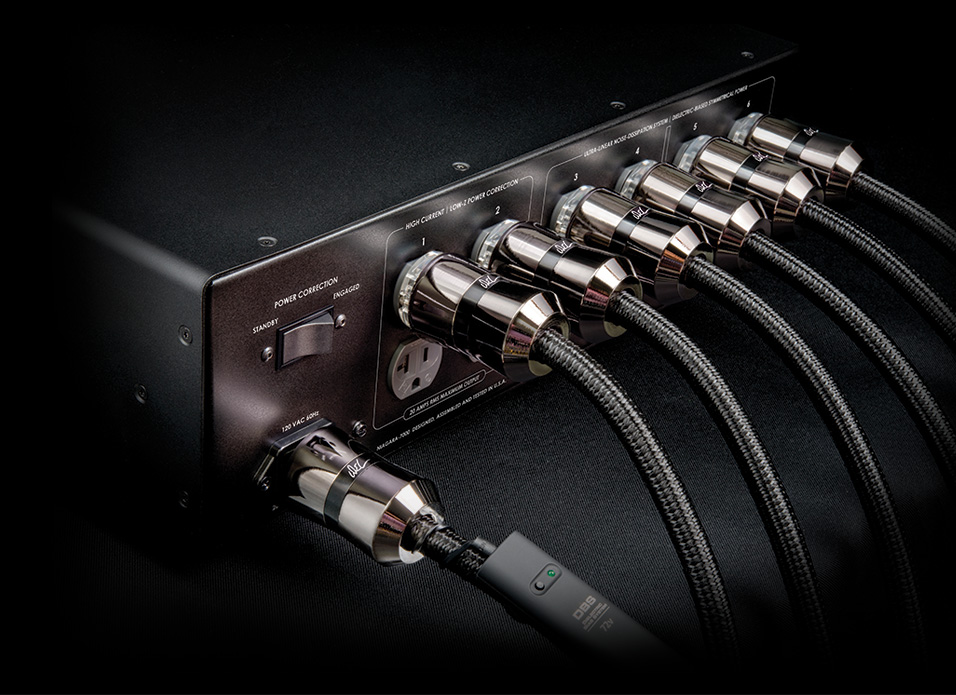 Through differential sample tests and spectrum analysis, it can be proven that up to a third of a high-resolution (low-level) audio signal can be lost, masked, or highly distorted by the vast levels of noise riding along the AC power lines that feed our components.

This noise couples with the signal circuitry as current noise and through AC ground, permanently distorting and/or masking the source signal. Our systems’ sensitive components need better alternating current.

True audio/video optimisation is never a matter of any one secret or exotic circuit. When it comes to noise dissipation for AC power, many approaches can yield meaningful results. However, these approaches may also impart ringing, current compression, and non-linear distortions that can render the cure worse than the disease.

While there currently exist a number of AC power conditioners, isolation transformers, regeneration amplifiers, and battery back-up system topologies, Audioquest takes a holistic, science-based approach to AC power technology and represents a comprehensive solution to the ever-increasing noise that plagues our power lines.

Redefining the science of power conditioning

With an AudioQuest Niagara 7000, music lovers can finally experience the clarity, dimensionality, frequency extension, dynamic contrast, and grip their A/V systems have been capable of delivering—if only the power had been right!

So elegant, so logical, and so obvious

A great system is built from a solid foundation, and that foundation starts with power. With an AudioQuest Niagara 5000, you’ll experience for the first time the clarity, dimensionality, frequency extension, dynamic contrast, and grip your system has always been capable of delivering—if only the power had been right!

We welcome you to experience the Niagara 5000 and hear firsthand the remarkable results of highly optimized power management: startlingly deep silences, stunning dynamic freedom, outstanding retrieval of ambience cues, and gorgeous delineation of instruments and musicians in space. Once you’ve experienced it, it may seem so elegant, so logical, and so obvious that you find yourself wondering why it hadn’t been done before.

Though it’s easy to tout a given technology, it’s quite another thing to create a solution that is consistent, holistic, functional, and that honors verifiable science. It’s not enough to reduce AC line noise and its associated distortions at just one octave, thus leaving vulnerable the adjacent octaves and octave partials to noise, resonant peaking, or insufficient noise reduction. Consistency is key. We should never accept superior resolution in one octave, only to suffer from masking effects a half-octave away and ringing artifacts two octaves from there. This is the principal criterion for AudioQuest’s Low-Z Power Noise-Dissipation System.

A great system is built from a solid foundation, and that foundation starts with power. With an AudioQuest Niagara 3000, you’ll experience for the first time the clarity, dimensionality, frequency extension, dynamic contrast, and grip your system has always been capable of delivering—if only the power had been right!

The Niagara 1200’s non-sacrificial protection circuits ensure that your system is thoroughly protected from AC surges and spikes, and the Niagara 1200 protects itself—no damage, no down time. Set it and forget it.

But what do our customers think?

Here are some comments from just a few of our customers who’ve added a Mains Conditioner to their already superb systems:

With a couple of weeks use of the mains conditioner under my belt, can a bigger upgrade be made for the money? Simply stunning in my system!!

It took just a couple of minutes into a demonstration of the mains conditioner to convince me that I had to have one. The amazing lack of background noise helped to bring out detail that was just not audible before. Well worth the money! I would recommend this piece of kit to any true music enthusiast. It really works!

The effect of the mains conditioner upon my venerable Kairn n’ Aktiv Klouts n’ Keilidhs was that of eucalytus oil upon a diva with a cold. Vocal timbre and bass clarity and depth are particularly improved without detriment to the overall balance and separation across the soundstage which itself has improved depth and breadth. There is also significant improvement in rooms served by the Intersekt which, along with my Akurate CD and Pekin, is also driven by this wonderful black box of tricks. Without doubt the most cost effective improvement in sound presentation in 17 years of system tweeking. Another one please for the cinema!*

I believe that the mains conditioner is now the starting point for any system. The improvement it makes to even the best systems is quite simply staggering. Not only does it allow you to hear things that just were not there before it also gives what I can only describe as a three dimensional quality to the sound particularly on vocals. The conditioner allows the system to breathe and also significantly reduces system noise which, at quiet points, makes you think the system is switched off. If you are looking to upgrade then this should be seriously considered.

Now to begin with I have to say that I have always been of the opinion that mains conditioners have never been needed with Linn equipment and every one I’ve heard in the past has been detrimental – until now.

The other day I was shown a couple of mains conditioners from a company called Furman from the States.

I have to say that I have had my eyes opened big time. I would say they give one of the biggest upgrades I have heard.

The Elite PF 16Ei (£950) and the IT Reference 16E i (£3199) are the two I heard. The Elite improvement was massive (KK to KK1 sort of scale) and the Reference was just mind blowing. They are split into 2 sections, the 1st giving massive low resistance clean power reserves for power amps and the other a clean power source for lower demands like pre-amps and sources and on the Reference 16Ei a further bank for digital/computer equipment. They allow your equipment to do what it is capable of and wow is it capable of delivering more that we’d heard before.

Sound-wise I can say that they represent one of the biggest and best value upgrades I have heard and I have listened to them work on Majik, Akurate and Klimax systems with equal success, including LP12s (which was mindblowing). The soundstage is expanded and instruments easily defined and placed. Instruments are rounded and more 3D if I can explain it like that. Notes have texture and timbre. Voices clear and precise. Attack and decay are much better defined and on my 242’s the whole frequency response is improved, bottom to top.

I apologise for the long post but I seriously think that this should be the first thing you buy, then build the rest of your system around it. It is that significant.

At the moment I think Chris Brooks Audio is the only dealer demo’ing them. I highly recommend you give them a listen.